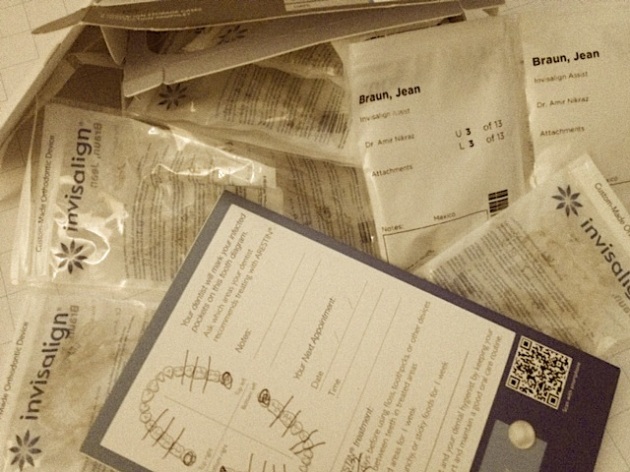 . . . I’ve replaced more crowns than half the kingdoms in Europe at the onset of the 20th Century.

“Your gums are shrinking and there is leakage,” Dr. Nikraz informed me. “With braces, your problems will be solved.”

“O yarm eye?” My mouth was filled with cotton, making it hard to argue.

“If we start now, we can be finished in nine months,” he continued.

How did he know about my last three relationships?  Was that on the intake form?

My teeth are now perfectly aligned, newly crowned and all facing true north.

My bite matches my bark. Which brings a new issue to forefront. My smile. Now whiter and wider than the Bible Belt, every time I laugh [which is often] my face displays more wrinkles than a Neapolitan Mastiff.

At least my three-chin profile is reduced to two. If you look long enough, you can rationalize an excuse for anything.

I look good lying down; however, it’s difficult to drive. What’s more, being prone often gives the wrong impression.

My teeth, on the other hand, now leave a fabulous impression.

Conspiracy theory aside, if one member of a pair of socks has gone AWOL [absent without leg], look to inner space. The lint trap of the dryer or the area outside the main laundry tub. Of course, this means you have to take these machines apart. Before you begin, lay your hands upon the lids and intone your mantra. Don’t have a mantra? Hum to the nifty beat of this Sock Song.

Poor little island of money laundering. The Euro world is targeting Cyprus for having such loose bank regulations that Russian billionaires as well as the usual one-percent suspects have parked enough wealth there to sink the entire country. [Russian Billionaires? This would have been an oxymoron ten years ago.] The country, by the way, is divided already. The west portion speaks Greek. The east, Turkish.

Heaven or Hell or Purgatory

Imagine, getting all your socks back when you kick the bucket, using the foot with the remaining sock on it of course. Purgatory would be spending eternity waiting for the sock orphan to show up. Heaven would be infinite tubs of Sock Monkeys. Hell would be, oh let’s see, having to ‘darn’ them, oh damn, er, darn.

No chance of finding it now, with the sequester. Funds for National Aeronautics and Space Administration have been cut and we are all in danger of being attacked by asteroids. Asteroids? Yes. It’s a well-known fact that asteroids are actually comprised of all the  socks that have ever existed and disappeared. How long is this?  Snce they were first developed by the ancient Greeks in the 8th century BC.

There’s a App for That

Seems we’ve gone full circle. Oh, those Greeks! One more thing: check out the Bureau of Missing Socks. It’s amazing what you’ll find on the Internet these days!